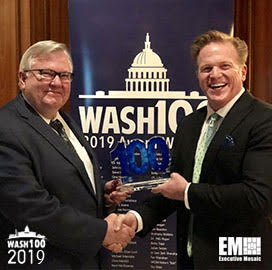 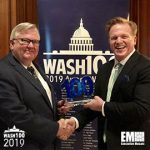 Executive Mosaic recognizes White for his efforts to be innovate in the fields of spacecraft technology and space exploration. We are honored to present the most coveted award in government contracting to Richard White of SSL Government Systems.

White joined SSL as senior vice president of business development government systems in October 2016. He held the position for six months before becoming president of government systems. His areas of expertise include surveillance and reconnaissance, satellite antennas and payloads, intelligence and cyber security.

Prior to joining SSL, White served as the COO and CEO of the Capstone Corporation between 2013 and 2016. He began his career with the Harris Corporation in 1999 as the director of space programs, serving in several ascending leadership positions with the corporation.

Jim Garrettson, founder and CEO of Executive Mosaic, presented Richard White, president of SSL Government, with his first Wash100 Award on Friday. Executive Mosaic recognizes White for his efforts to be innovate in the fields of spacecraft technology and space exploration. We are honored to present the most coveted award in government contracting to Richard
Sponsor