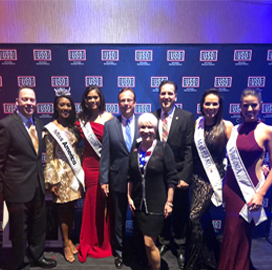 Elaine Rogers, president and CEO of USO-Metro, presided over the annual networking event held Thursday at Hyatt Regency Tysons Corner Center in Virginia to raise funds for the organization’s programs supporting servicemembers, veterans and their families in the Metropolitan Washington-Baltimore area.

Bill Sapp of CenturyLink (NYSE: CTL) co-chaired the event with Cyrus Zol, creator of the “Salute to Veterans Series.”