Raytheon Gets $482M Contract to Update Close-in Weapon Systems for US, Foreign Clients 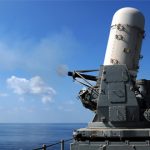 Raytheon (NYSE: RTN) has received a potential six-year, $482.3M contract to update MK 15 Close-in Weapon Systems for the U.S. Navy and the U.S. Army as well as the governments of Taiwan, Saudi Arabia, Japan, New Zealand and Australia.

The company will also overhaul systems and provide hardware for the CIWS platform used to defend against anti-ship missile threats, the Defense Department said Thursday.

The Army will obligate $415.7M at the time of award, with $66.6M of the obligated funds slated to expire by the end of the current fiscal year.

DoD noted the contract, which includes a no-cost option, was awarded on a sole-source basis and work will occur at various locations across the U.S. through April 2024.

CIWS is designed to automatically detect, analyze, track and engage ASM and high-speed aircraft threats. The Navy and 24 U.S. allies use the system on surface combatant ships.