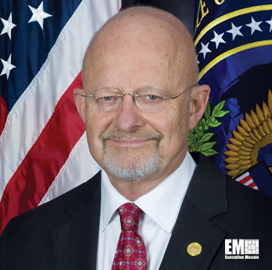 When he was asked if he meant the government was under assault “internally, from the president?” Clapper responded, “Exactly.” He added that with Trump as president, the three co-equal branches of government are “under assault” and “eroding.”

Trump’s firing of Comey last week came without warning and accusations that the FBI had requested more resources to investigate Russian meddling in the 2016 presidential election. After a six month investigation, the FBI has still to turn up evidence of Russian interference.

Trump’s decision drew criticism from lawmakers on both sides of the aisle last week, as Trump fired off an ominous tweet Friday warning Comey against any leaks to the press because he may have “tapes” of their conversations.

Lawmakers are urging the president to select an apolitical FBI director. Republican Sen. Lindsey Graham, a member of the Judiciary Committee, recommended an FBI agent to lead the agency so the nation could have time to “reset.” Graham dismissed two choices under consideration, Rogers, an ex-FBI agent and former chairman of the House Intelligence Committee, who has the backing of the FBI Agents Association, and Cornyn, the No. 2 Republican in the Senate.

“It’s now time to pick somebody who comes from within the ranks, or is of such a reputation who has no political background at all who can go into the job from Day 1,” said Graham.
“The president has a chance to clean up the mess he mostly created,” Graham said, adding, “I have no evidence the president colluded with the Russians at all, but we don’t know all the evidence yet.”

The Justice Department has interviewed at least eight candidates for the position, and 14 people are believed to be under consideration, including lawmakers, attorneys and agents. President Trump has said he may make the decision this week before he leaves for his first overseas excursion as president.

“I think the process is going to go quickly. Almost all of them are very well-known,” Trump said of the candidates. “They’ve been vetted over their lifetime essentially, but very well-known, highly respected, really talented people. And that’s what we want for the FBI.”

Senate Minority Leader Chuck Schumer of New York, a vehement critic of the Trump administration and his decision to fire Comey, said the new FBI director should be someone “not of partisan background” with “great experience” and “courage” while hinting that Democrats may withdraw support of the new FBI director unless a special prosecutor is named.

However under Senate rules, Republicans can confirm a new FBI director with 51 votes. They currently hold 52 seats in the chamber.

While the FBI director serves a 10-year term, he can be replaced by the president.

Clapper: U.S. Government ‘Under Assault’ Due to Comey’s Firing

Former Director of National Intelligence James Clapper said Sunday that the U.S. government is “under assault” after President Donald Trump’s decision to fire FBI director James Comey. “I think, in many ways, our institutions are under assault, both externally — and that’s the big news here, is the Russian interference in our election system,” Clapper said. “I think