Home Contract Awards Report: Lockheed Aims to Save $5B on F-35 Program Amid Lot 11 Contract Negotiations

Lockheed Martin (NYSE: LMT) has initiated talks with suppliers to generate $5 billion in cost savings on the F-35 program as the company negotiates a contract to produce the 11th batch of fighter jets, Bloomberg reported Tuesday.

Hewson’s statement came three months after she offered Trump her “personal commitment” to reduce the F-35 program’s cost and a month after the company finalized an $8.5 billion contract with the Defense Department to deliver 90 lot 10 F-35s.

Bruce Tanner, chief financial officer at Lockheed, said in an interview that he thinks Trump’s presence “creates momentum to get Lot 11 done quicker than we have in the past.”

The report said Trump’s proposed budget for fiscal 2018 included the procurement of additional F-35s for the U.S. Air Force.

An official with Lockheed said Tuesday the lot 11 agreement may place an order for up to 130 fighter jets from the company, the report added.

Kenneth Possenriede, a more than 30-year Lockheed Martin (NYSE: LMT) veteran, has been named executive vice president and chief financial officer of the company in a move that will take effect Feb. 11. He will succeed the retiring Bruce Tanner, a 37-year company executive who served as CFO for more than a decade, Lockheed said

Report: Lockheed Aims to Save $5B on F-35 Program Amid Lot 11 Contract Negotiations 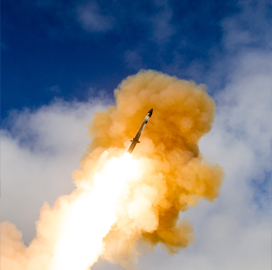 August 22 – August 26 2016 Click here to see Real-Time GovCon Sector Quotes A Note From Our President & Founder Jim Garrettson An investment analyst at the U.S.’ biggest and world’s fifth largest bank endorsed the defense sector this week in a note to investors with a forecast that views continued “green” movement in stock prices. Seth Seifman of