Executive Mosaic’s GovCon Index retreated Wednesday on declines by large prime and middle-tier services contractors that offset a surge by McKesson Corp. (NYSE: MCK) in a session that saw U.S. stocks trade in narrow range to close the month of November.

U.S. market activity was dominated by the agreement among OPEC countries to reduce oil production by 4.5 percent and news of that pact sent energy stocks up 4.8 percent but the S&P 500 composite index closed at little change with utilities the largest decliner among six sectors.

Wednesday’s declines did little to offset the best month for both the GovCon Index and U.S. stocks since July as the GCI rose 13.07 percent for November and the S&P 500 added 3.42 percent on investor anticipation over President-elect Donald Trump’s economic agenda that emphasizes defense and infrastructure spending along with other domestic-focused items such as corporate tax reductions.

GovCon Index decliners outnumbered advancers by a 2-to-1 ratio Wednesday and three of its 11 S&P 500 components registered declines with co-listed McKesson the best net gainer in the GCI overall and Northrop Grumman (NYSE: NOC) as the lowest performer.

Shares in Northrop tumbled after Bloomberg reported a company program to develop a new cyber-hardened network for the U.S. Air Force has nearly doubled in cost and missed a major deadline by more than three years.

ManTech International (Nasdaq: MANT) posted the GCI’s second-biggest net loss Wednesday after Maxim Group downgraded its rating on the government services contractor to “Hold” from “Buy” in a note to investors Wednesday.

Huntington Ingalls Industries (NYSE: HII) weighed as the GCI’s third-largest laggard despite the military shipbuilder’s open to a new 52-week high Wednesday and its decline continues a six-day stretch of trades between gains and losses for the Newport News, Virginia-based company.

Shares in Huntington Ingalls surged 10.78 percent in November as investors singled out the company as a beneficiary of Trump’s pledge to increase the U.S. Navy‘s fleet, while engineering and construction contractors AECOM (NYSE: ACM) and KBR (NYSE: KBR) climbed 30.52 and 12.82 percent respectively on optimism over the president-elect’s infrastructure proposals.

Twelve GCI stocks in total with five also in the S&P 500 registered declines greater than $1.00 Wednesday, while McKesson and Navistar International (NYSE: NAV) posted gains above that benchmark. 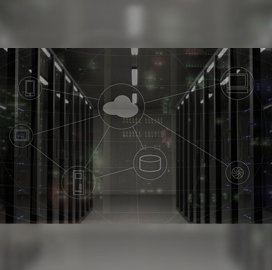 President Donald Trump has signed an executive order that seeks to address foreign use of infrastructure as a service cloud computing platforms for malicious cyber activities. The order directs the secretary of the Department of Commerce to develop rules within six months to require IaaS providers to verify the identity of foreigners with IaaS accounts