The Robert H. Smith Business School at the University of Maryland hosted the 10th Annual CIO Forum on November 6, 2009 at the Ronald Reagan Building in Washington, DC. The Forum included government and industry speakers who discussed “Web 2.0 and Beyond: Where will the Internet Take us Next?”

The event featured two keynote government speakers, Vivek Kundra, the Federal Chief Information Officer, and Paul de Sa, of the Federal Communications Commission. Kundra discussed the need for transparency and participation, central tenants of the present Obama administration. Additionally, Kundra pointed to the need to move away from a ‘checklist’ mindset and into one that is less linearly oriented.

Paul de Sa, the Chief Strategist at the FCC, discussed some central issues facing the future of telecommunications. Most importantly, de Sa called for input from industry experts in crafting future policies that the FCC is currently examining. He discussed four major areas that the FCC is currently examining, namely Broadband, Open Internet (net neutrality), Spectrum policing, and removing the old phone network. The FCC is currently considering an attempt to reach everyone with broadband service. Currently, 63 percent of Americans have broadband internet access at their home. However, 33 percent of individuals in the US have access to broadband but have not yet adopted it. The FCC is currently conducting a large national survey to determine why some people have not moved to broadband.

The other major arena de Sa discussed was net neutrality, currently a hot button topic with the FCC. He stressed that the FCC is still at the beginning of the decision making process and welcomes input from a variety of sources. de Sa believes that the concept of net neutrality will be central to how the internet will evolve in the years to come.

The event was attended by hundreds of technology professionals in industry, government and academia. The Robert H. Smith School of Business is a leader in management research and education. The MBA Program was ranked 20th in the US for 2009 by the Financial Times. The school offers undergraduate and several graduate programs including, MBA, MS, PhD and an Executive MBA program. 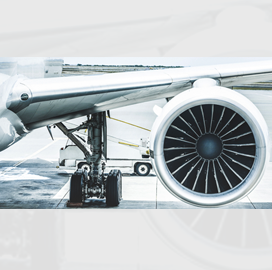 The Federal Aviation Administration (FAA) has awarded a potential seven-year, $24 million contract to a University of Maryland-led consortium that conducts research on operational issues facing the government and commercial aviation sectors. It marks the agency's second funding renewal to support the National Center of Excellence for Aviation Operations Research mission.

The Robert H. Smith Business School at the University of Maryland hosted the 10th Annual CIO Forum on November 6, 2009 at the Ronald Reagan Building in Washington, DC. The Forum included government and industry speakers who discussed “Web 2.0 and Beyond: Where will the Internet Take us Next?” The event featured two keynote government
Sponsor