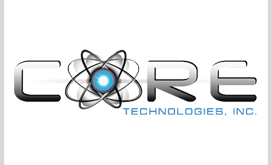 Mitre has secured a potential one-year, $463M contract from the U.S. Air Force to continue to serve as administrator of the National Security Engineering Center.