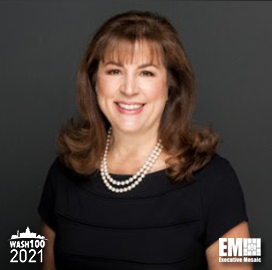 Nazzic Keene, CEO of Science Applications International Corp. (NYSE: SAIC) and a 2021 Wash100 Award recipient, said the company will align its strategy to focus on potential areas of growth, including information technology modernization and space, amid the possibility of federal budget constraints, the Washington Business Journal reported Friday.

“I think it depends greatly, as we all navigate where the budgets end up, where the pressures end up, but the areas that we’ve elected to invest in and the areas that we believe will be catalyst to our ability to grow above market in the years to come really are those areas that I’ve touched on: IT modernization, digital engineering across the entire portfolio, the space domain,” Keene told analysts during SAIC’s earnings call Thursday. “We’re investing in those areas for long-term growth.”

Keene said she believes the company has aligned itself to focus on areas that would allow it to meet the government’s priorities.

“The assumption, I think in general in the industry, is that the budgets are going to be relatively flat as we look forward,” she said. “But with that, we do see that there are opportunities within the next couple years. We’re seeing increased appetite and interest in IT modernization, certainly the cyber emphasis on that. We’re seeing focus on the space-related missions, and so the way we think about the next few years is continued emphasis and focus on those parts of our portfolio that we believe even with the flattish budgets over the next few years, that these could be areas of higher growth opportunity.”

SAIC earned $7 billion in revenue for its 2021 fiscal year and $1.7B in fourth quarter revenue, both amounts reflecting an 11 percent increase from the prior-year period.

The Reston, Virginia-based government technology services contractor posted a contract backlog of $21.5 billion with a book-to-bill ratio of 1.7 for FY 2021.