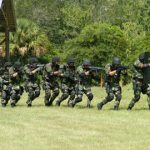 The Army Contracting Command received four proposals for the firm-fixed-price contract and will obligate funds and assign work location upon award of each task order, the Defense Department said Monday.

Both contractors will perform work through March 27, 2021, according to DoD.