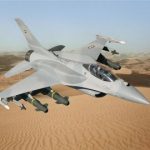 Greece’s government council for foreign affairs and defense has approved a plan to buy F-16 aircraft upgrade services from the U.S. through a potential $1.45 billion contract, Reuters reported Saturday.

Reuters cites a defense ministry official that says 82 Greek fighter jets will undergo refurbishment within the country and three units will undergo modernization in the U.S.

The Greek government previously said it would finance the F-16 fleet overhaul program with annual payments of approximately $133 million, according to the report.