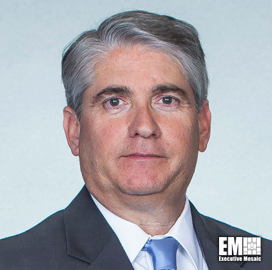 Mengucci will continue to report to CACI President and CEO Ken Asbury and will oversee the company’s mergers and acquisitions, contracts, human resources and recruitment and business development operations, the company said Monday.

Mengucci previously worked at Lockheed Martin (NYSE: LMT) and held leadership roles at the information systems and global solutions business that was spun off from Lockheed and subsequently merged with Leidos (NYSE: LDOS) in 2016.

He also served as a board member of the Tech America Public Sector Board and the RTCA NextGen Advisory Committee.

DeEtte Gray, former president of the intelligence and security sector at BAE Systems’ U.S. subsidiary and a 13-year veteran of Lockheed, succeeds Mengucci as president of CACI’s U.S. operations.

Executive Mosaic CEO Jim Garrettson recently presented Al Whitmore, president of the intelligence and security sector at BAE Systems Inc., with his 2022 Wash100 Award during a visit to the company’s office. Executive Mosaic is thrilled to recognize Al Whitmore as a five-time Wash100 Award recipient, the most prestigious award that is presented annually to those who exemplify the

BAE Systems has secured a two-year, $299 million order from the U.S. Army to manufacture additional self-propelled howitzers and carrier ammunition-tracked vehicles. The company said Wednesday it will produce and deliver 40 sets of M109A7 howitzers and M992A3 CAT platforms and spare parts to the service branch. Work will occur at BAE locations in Pennsylvania,