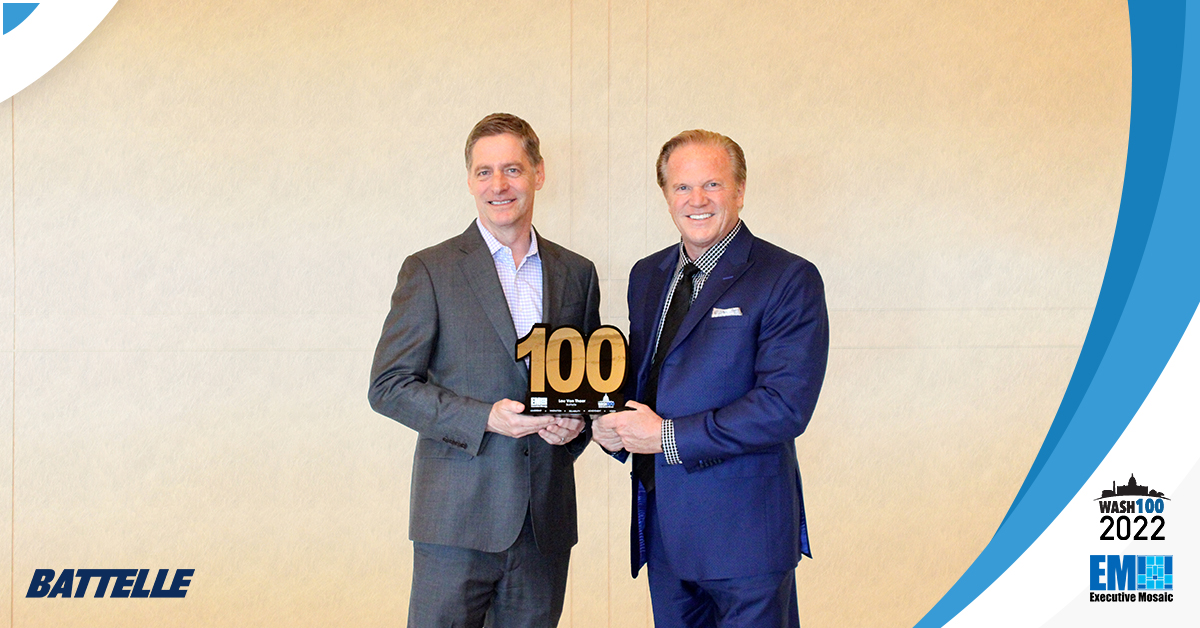 Battelle President and CEO Lou Von Thaer was officially presented his 2022 Wash100 Award, the highest honor in all of government contracting (GovCon), during a recent visit to the company’s office by Jim Garrettson, founder and CEO of Executive Mosaic.

Executive Mosiac was honored to present Lou Von Thaer with his seventh Wash100 Award for stewarding Battelle to position itself for annual revenue growth and securing its management role at eight of the 17 Department of Energy national laboratories across the globe.

Visit Wash100.com to read the full Executive Profile for all seven of Lou Von Thaer’s Wash100 wins over the award’s nine-year history. Check out who won this year’s 2022 Wash100 Vote Standings as well!

As a seven-time Wash100 winner, Lou Von Thaer has demonstrated an unwavering commitment to the GovCon community and a relentless level of success to drive Battelle forward as a significant organization in the federal landscape.

“This is why Battelle exists—to happen to the world,” said Lou Von Thaer in May following the acquisition of AmplifyBio. “We see a need, we see opportunities and we search for partnership. We keep Battelle at the leading edge of discovery for the benefit of humanity.

Most recently, Lou Von Thaer commented on the recent survey issued by Battelle to begin a dialogue surrounding the potential technological and policy options for decreasing environmental and societal impacts. The results revealed that 71 percent of participants believed the employment of renewable energy sources was crucial for climate resiliency.

Executive Mosaic is thrilled to recognize Battelle and Lou Von Thaer as a seven-time winner of the most acclaimed and prized award in all of GovCon. He has demonstrated a level of success and contribution to the GovCon industry that can only be recognized by the Wash100 Award.