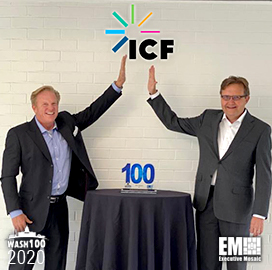 John Wasson, CEO of ICF, was presented his 2020 Wash100 Award on Thursday by Jim Garrettson, founder and CEO of Executive Mosaic. This marks the first Wash100 Award win for Wasson after securing valuable contracts and acquisitions to drive ICF’s revenue and expansion.

Most notably, Wasson led the acquisition of Incentive Technology Group for approximately $255 million as part of the efforts to expand information technology modernization support services to U.S. federal agencies in January 2020.

“This transaction is aligned with our strategy to complement organic growth with acquisitions that strengthen ICF’s position in key growth areas,” said Wasson. “IT modernization and cloud together is estimated to be approximately a $21 billion federal market and one in which ICF already has gained traction through organic expansion.”

ICF secured a three-year, $330 million U.S. Navy contract in July 2019 to provide cybersecurity support, including technical services and vulnerability assessments, to the Navy Information Warfare Center (NIWC) Pacific. The value of the contract could reach approximately $802 million over seven years if all the IDIQ contract options are exercised.

In addition, ICF entered into a lease agreement for a new headquarters building in Reston, Va to be completed in late 2022. Regarding ICF’s new headquarters, Wasson hopes the new headquarters  will inspire innovation, creativity and collaboration as the company celebrates its 50th anniversary.

Executive Mosaic applauds ICF and John Wasson on his 2020 Wash100 Award. Wasson has demonstrated his knowledge in the industry through his acquisitions and valuable contract awards. His Wash100 Award win shows the level of vision and success that Wasson has been able to achieve for ICF and for the GovCon sector.