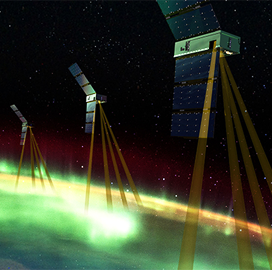 The Electrojet Zeeman Imaging Explorer initiative will deploy three small satellites intended to help researchers explore the electrical charge that flows up to 90 miles above the polar regions and connects an aurora to the magnetosphere, APL said Tuesday.

Peg Luce, deputy director of the heliophysics division at NASA’s Washington headquarters, said the EZIE team will use an instrument that has supported CubeSat-based Earth science programs.

“With these new missions, we’re expanding how we study the Sun, space and Earth as an interconnected system,” Luce added.

Jeng-Hwa Yee, a principal professional staff member at APL, will be the principal investigator for the mission that will be funded under the space agency’s Heliophysics Explorers Program.

The lab also collaborates with Princeton University to develop the Interstellar Mapping and Acceleration Probe for a NASA mission slated to launch in early 2025.