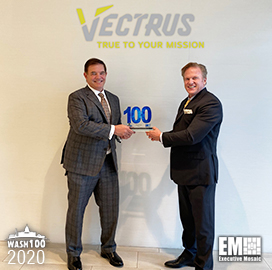 After being a 2019 Wash100 Award recipient for securing major contracts and expanding Vectrus’ position with numerous federal agencies. Prow continued those goals throughout 2019 and 2020, including a spot on a five-year, $6.4 billion indefinite-delivery/indefinite-quantity (IDIQ) Air Force Contract Augmentation Program (AFCAP V) contract vehicle to provide contingency planning, deploying and training and equipping of forces.

“We have placed significant emphasis on expanding our Air Force relationships and mission support and today, Vectrus is a trusted provider of facilities and logistics, information technology, network communications, operational technologies and converged solutions to the Air Force in 13 countries. We look forward to building on our track record of growth with this important client,” said Prow.

More recently, Prow revealed that Vectrus had achieved an increased revenue of $351.7 million for its first quarter results in May 2020 which demonstrated a $25.8 million increase compared to the first quarter of the 2019 fiscal year. Vecturs saw increases in revenue across the globe, including 15 percent from Europe, 14 percent from the U.S. and a five percent growth from the Middle East.

“Vectrus provides critical infrastructure support services globally for a variety of national security missions. This core competency combined with our backlog of long-term contracts with the U.S. government creates operating and financial resiliency, with predictable free cash flow, that is foundational to our business model,” said Prow.

Executive Mosaic congratulates Vectrus and Chuck Prow for his 2020 Wash100 Award. Prow’s role in the GovCon industry is one of the many reasons for its success. His continued excellence to drive company growth, M&A activity and innovation has clearly demonstrated Prow’s accomplishments and influence to grow the government contracting (GovCon) sector.