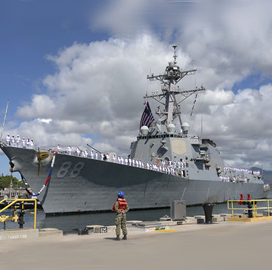 The company-run shipyard will perform repair, alteration and upgrade work on the vessel as part of the firm-fixed-price contract, the Department of Defense said Thursday.

Naval Sea Systems Command received two proposals for the project, which is expected to conclude in February 2022, and will obligate $103.6M at the time of award.

USS Preble will undergo modernization as part of the branch's efforts to ensure service life of DDG-51 class ships.