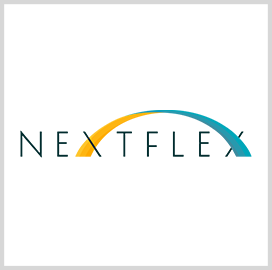 The NextFlex consortium is working with the U.S. Army and Air Force Research Laboratory to manufacture flexible hybrid electronic systems such as X-ray imaging and wearable health-monitoring devices under a potential seven-year, $154M cooperative agreement.

The Army-led project will run through 2026 and will support NextFlex's Manufacturing Innovation Institute on behalf of the Office of the Secretary of Defense’s ManTech Office, the Army Research Laboratory said Wednesday.

AFRL will facilitate the transition of the Army’s technologies to the private sector as part of the effort, which serves as NextFlex's second cooperative agreement with the lab and covers more than 60 DoD projects.

The Army, in partnership with the Defense Threat Reduction Agency, conducted prototyping activities fro the X-ray imaging technology before transitioning it to NextFlex for manufacturing and commercialization.

Eric Forsythe, a ARL physicist, said the project builds on AFRL’s additive manufacturing efforts for munitions research as well as its support for Amry modernization priorities.

“We want to leverage the industrial base and the manufacturing ecosystem that we built to push this kind of technology forward,” he added.

Other technologies in production include communication and sensor systems designed for soldier-authentication devices to ensure secure access to Army networks.