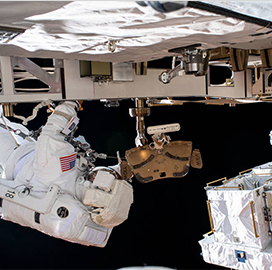 Both Chris Cassidy and Robert Behnken will replace batteries on the starboard 6 truss' 3B power channel. They will remove five of six nickel-hydrogen batteries for the truss' power system and install three new lithium-ion batteries, as well as accompanying hardware.

Twelve spacewalks will have been performed since 2017 to change out batteries for eight power channels used to route electricity on the station. After the replacements are installed, the astronauts will shift gears and remove two lifting fixtures used for ground processing of the station's solar arrays prior to their launch.

They'll also begin preparing the Tranquility module for the installation of a commercial airlock that will be used to deploy commercial and government-sponsored experiments into space. The systems have been provided by NanoRacks and scheduled to arrive on a SpaceX cargo flight.

These will be the 230th and 231st spacewalks in the history of space station assembly, maintenance and upgrades. The space coverage will begin at 6 a.m. Eastern time on NASA Television and the agency's website. The spacewalks will begin around 7:35 a.m., and could last up to seven hours.