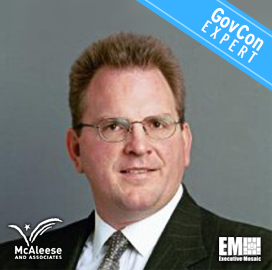 A report by consulting firm McAleese & Associates says Lockheed Martin (NYSE: LMT) expects a potential $35B block buy contract to be awarded in the fourth quarter of 2019 for lots 12 through 14 of the F-35 fighter jet.

Jim McAleese, founder and principal of McAleese & Associates and a 2019 Wash100 winner, wrote Lockheed is pleased with the specific terms of a fixed-price-incentive-fee contract for the aircraft.

“And as I've mentioned earlier on the F-35 production deals, we feel good with the deals we're getting with the customer. We think they're fair and reasonable, they're balanced,” Kenneth Possenriede, an executive vice president and chief financial officer of Lockheed, said Tuesday during the company’s earnings call for the third quarter of 2019.

“And we're now going through some housekeeping on the block buy and hopefully we have that definitized in the next week or two, and we'll start performing on that. And if we perform, there is opportunity for margin expansion there as well,” Possenriede added.