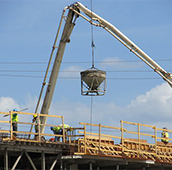 Windamir received the potential $10.6 million initial task order for the P643 Reserve Training Building project at Fort Benning in Georgia. The company is expected to complete work under this order in September 2021.