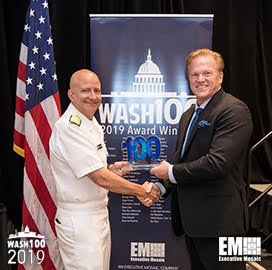 Executive Mosaic recognizes VADM Sharp for his vision to improve the agency’s capabilities in its use of emerging technologies. We are thrilled to present the most coveted award in government contracting to Sharp.

VADM Sharp succeeded Robert Cardillo, fellow four-time Wash100 Award recipient, as agency director after receiving Senate confirmation in December 2018. He was also elevated to the rank of vice admiral in the Navy.

He graduated from the University of the Pacific in 1988 with a bachelor’s degree in English and was commissioned through Officer Candidate School the same year. He earned his master’s degree from the Industrial College of the Armed Forces in 2008.