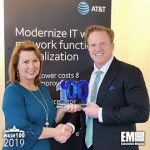 Executive Mosaic recognizes Singer for improving AT&T’s position in artificial intelligence, big data and machine learning. We are honored to present the most coveted award in government contracting to Jill Singer of AT&T.

Before joining AT&T in 2015, Singer was a partner with Deep Water Point from 2013 to 2015. She also served as the chief information officer for the National Reconnaissance Office from 2010 to 2013. Singer became the deputy CIO for the U.S. Intelligence Community in 2006 and served for three years. She began her career as director of the Diplomatic Telecommunications Service at the State Department from 2004 to 2006.

Since 2013, Singer has served as the federal CIO Emeritus for Tummler Singer Associates, a female-owned consulting firm focusing on strategy, innovation transformation and leadership. In addition, she also serves as a member on the Governing Board of the International Spy Museum and the Board of Trustees for the University of West Florida. Singer earned her BS in Systems Science in 1984 and MS in Systems Analysis from the university in 1985.

The Department of Defense has awarded a task order worth $1M to Microsoft (Nasdaq: MSFT) under the potential 10-year Joint Enterprise Defense Infrastructure cloud computing contract.