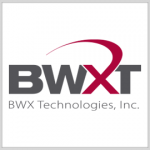 Work will occur at the company’s facilities in Virginia, Ohio and Indiana.

The company expects the service branch to award additional options within the year.

BWXT has developed and produced nuclear technology platforms since the 1950s, including those used for the USS Nautilus,and submarines under the Ohio, Virginia, Seawolf and Los Angeles classes.