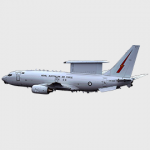 Boeing expects to create 165 jobs across its offices in Australia, including 120 jobs in Brisbane and 45 at air force bases in Amberley and Williamtown through the project.

E-7A is based on Boeing 737-700 and currently serves as a mobile radar and battle space management system for the international coalition against the Islamic State militant group.

The modernization is scheduled to be completed by mid-2022.

Lockheed Martin (NYSE: LMT) emerged as the final contender for the U.S. Army’s Precision Strike Missile prototyping competition, Jane’s 360 reported Tuesday. The PrSM program seeks to develop a precision-strike, surface-to-surface guided missile to replace the Army Tactical Missile System and that can be fired from the M142 High Mobility Artillery Rocket System and M270A1 Multiple Launch Rocket System to neutralize targets at ranges of up to 499 kilometers.