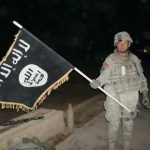 The U.S. military has improved its counter-fight against ISIS’s cyber operations in the last six months, the commanding general of Army Cyber Command Lt. Gen. Paul Nakasone said this week.

“I think what we are learning is in terms of being able to counter a message, being able to attack a brand — in this case the brand of ISIS,” said Lt. Gen. Paul Nakasone during a Senate Armed Services subcommittee hearing. “Then, the other thing is, how do we do this with the speed and accuracy that is able to get at an adversary that six months ago was moving uncontested in cyberspace?”

“I think we’ve learned those things over the last six months. I think we as a department have done much better,” he said.

ISIS recruits heavily online, radicalizing youth in Western countries and entreating them to travel to Syria and Iraq and join their fight to establish an Islamic State.

The efforts the Army uses to combat this are top secret. Former Defense Secretary Ash Carter compared the offensive cyber tools the military uses against terrorists to “dropping cyber bombs.”

QuantiTech, a technical engineering services provider to the government sector, has purchased Dynamic Concepts Inc. for an undisclosed sum in a move to expand work with NASA across human spaceflight programs.