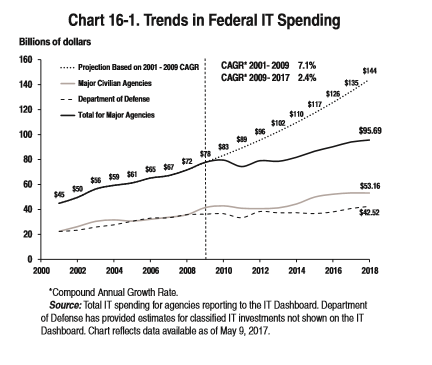 The funding request asks for investments for four functions: mission delivery; administrative services and support systems; IT infrastructure and security; and IT management; and grants.

The administration document requests agencies to “identify and budget for the modernization of specific high-risk legacy IT systems, with a particular focus on transitioning these systems to cloud and shared services.”

There is significant variation in spending according to agency. 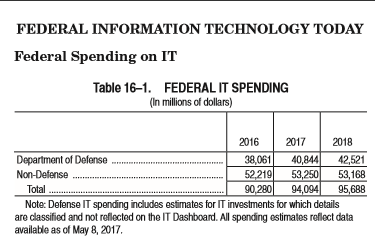 The Department of Health and Human Services spends the largest quantity of money on IT of all the civilian agencies; with the bottom sixteen agencies spending only 10.7 percent, according to documents released by the administration. 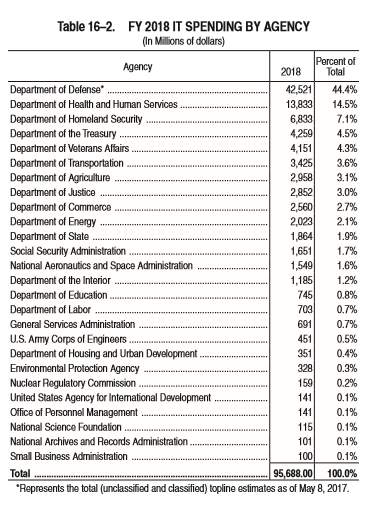 Trump’s request breaks down IT spending into categories, including modernizing government technology, creating modern citizen-facing services, modernizing and streamlining the acquisition and administrative processes used by government, continuous diagnostics and mitigation, improving data analytics and IT portfolio management, and cybersecurity.

Federal IT spending is classified in one of two ways: either for Operations and Maintenance (O&M) or Development, Modernization and Enhancement (DME.)

A significant portion of Federal IT dollars are spent maintaining legacy systems. Of the $48.5 billion shown on the IT Dashboard, 78.5 percent of that is spent on either operations or maintenance (O&M.) This spending goes towards existing investments. 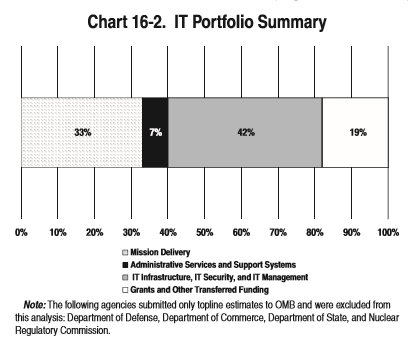 Additionally, the administration requests $228 million for a tech modernization fund that would improve the management and oversight of Federal IT modernization projects and be dedicated to transitioning Federal agencies from IT infrastructure, systems, and services that are not cost-effective or secure to more efficient and secure technologies. The fund would be overseen by the General Services Administration (GSA.)

The administration touted this central fund as “self-sustaining” and said that it would “provide strong incentives for agencies to develop comprehensive, high quality modernization plans” because of its competitive nature in allocation to “priority agency projects.”

The fund delivers money as projects reach benchmarks and is replenished by payments from agencies. The agencies pay for this by borrowing and “fee-for service receipts from the development and operation of shared IT platforms.”

“The fund is to be administered by GSA in accordance with an inter-agency project review board chaired by the Federal Chief Information Officer and comprised of experts in IT acquisition, cybersecurity, and agile development,” the budget proposal says. “The board will review agency modernization proposals and select projects for funding to ensure prioritization of projects with the greatest government-wide impact and probability of success.”

President Donald Trump’s fiscal year 2018 budget proposes to spend $95.7 billion to update Federal information technology, a 1.7 percent increase from fiscal year 2017, according to the administration. The funding request asks for investments for four functions: mission delivery; administrative services and support systems; IT infrastructure and security; and IT management; and grants. The administration document requests
Sponsor