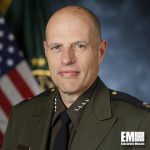 Since Trump’s election, CBP has seen a “dramatic change in the flow of people coming to the southwest border,” said Vitiello. “We are at a 45-year low” in the number of people crossing the border, even though “we started the year well above average. I think we were 20 percent above range in flow [of people] and arrests, and now we are down [to] a 45 year low since about November 8th.” Drug seizures are “down also about 35 percent,” he added.

In 2016, the average arrest count along both borders was around 1,140 people, whereas today it stands at just around 500.

Trump pledged to erect a wall on the U.S. border with Mexico and add 5,000 agents to the CBP’s current level of about 19,000. Trump’s border security executive orders are all based on statute and current law, said Vitiello.

“It’s not just a wall; it’s not just a concrete barrier; it’s not just that physical infrastructure,” Vitiello said. “What we were asked to do under the terms of the order … was to build a barrier at the southwest barrier that helps impede and deny people from coming across the border…”

“You will have seen the headlines of billions and billions of dollars” for 1,300 miles of infrastructure along the southwest border, said Vitiello, but it’s important to remember that the cost is not just for “concrete and steel…. It’s expensive not because concrete and steel is expensive, although they are — it’s expensive because we’re going to wrap around all that enforcement infrastructure the ability to identify, classify, and have situational awareness within that enforcement zone.”

“It’s going to be very expensive,” said Vitiello, and “we’re going to ask [Congress] for a substantial amount.” After Congress determines funding, the agency will prioritize initiatives based on threat.

Trump’s order “brings back into focus for us in CBP the concept of operational control… We define operational control as the ability to impede or deny illegal border crossings.” There are many “different ways that we can slow people down as they approach the border and try to cross,” he said, and CBP deploys a veritable arsenal including cameras, queuing technology, aircraft, agents, the ability to deploy an “appropriate, time-bound law enforcement response” between the ports of entry, identification of targets, and “infrastructure that allows us to move laterally along the border.”

Vitiello said CBP is focused on classifying everyone they come into contact with at the border through use of biometrics, fingerprints, and real descriptions of their prior contact with law enforcement and then putting them “through what we call a consequence delivery system.”

This is “a post-arrest response by the government that is the most effective” based on the person’s classification. CBP looks at the outcomes of what happens to the person after they’re in custody to make the determination as to which agency (ICE or DOJ) they should be turned over to.

He stressed that the challenges faced at the border, like drug seizures and human trafficking, are handled by many federal agencies working hand in glove. “We want all of our partners to participate in the policies, the laws, and the capacities that exist downstream. When a drug seizure is made, [and] that individual is prosecuted and investigated…it’s not just DEA, it’s ICE… it’s the Department of Justice” so there are many layers, he said. Vitiello said it is “important to recognize” that there is not a single solution for the problem because “the border is very dynamic.”

Properly policing the border requires the patrol to be smart about how it uses resources, and technology has a key role to play. CBP is particularly interested in Silicon Valley and commercial technology that can be repurposed, because it is already tried and tested and can be acquired quickly.

Vitiello said CBP is looking at relocatable towers with fixed technology, and will continue to invest in Aerostats, radar, cameras and surveillance, binoculars and night vision, handheld devices and equipment for their air and marine partners. A piece of equipment called the integrative fixed tower, “is one of the most robust pieces of equipment installed on the border,” he said.

CBP is ramping up hiring and Vitiello said they’re looking to recruit from outside the southwestern states, as well as retention and relocation incentives so as to prevent losing officers to ICE.

The parts of the executive order which are specific to border patrol include the addition of 5,000 agents. CBP is trying to “shrink the time it takes” to hire after someone applies to border patrol. “We’ve gone from well over 300 days to just over 150 days,” he said.

Vitiello has been promoted to acting commissioner. He has served with the patrol for 32 years and he said he has enjoyed every minute of it.