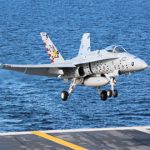 The contract award comes a month after Raytheon received a potential six-year, $255 million contract from the Navy to design, build and test JPALS.

JPALS works to provide surveillance and navigation guidance to fixed- and rotary-wing aircraft pilots to facilitate landing on aircraft carriers through the use of a GPS platform and a two-way data link.