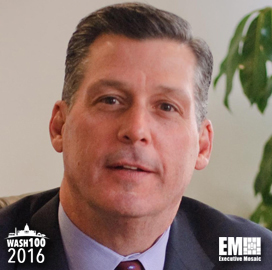 Executive Mosaic, Tysons Corner, VA March 15, 2016 — Mac Curtis,  Vencore President and CEO, has been inducted into Executive Mosaic’s Wash100 list of the most influential leaders in government contracting for his leadership in tech research-and-development.

The Wash100 is the premier group of private and public sector leaders selected by Executive Mosaic’s organizational and editorial leadership as the most influential voices in the GovCon sector and recognized for their leadership, vision, innovation and achievement on behalf of American citizens.

In July 2013 Curtis joined The SI Organization, which in July 2014 would come to be known as Vencore.

Among Curtis’ accomplishments with the Veritas Capital-owned company was in April 2014 his oversight of the acquisition of QinetiQ North America‘s services group for approximately $165 million to $215 million.

Over a span of 25 years Curtis has worked in the GovCon industry and held leadership positions at DynCorp International, Vangent and its predecessor Pearson.

“We are proud to announce this year’s selections to the Wash100. This list represents individuals who have demonstrated outstanding leadership through another memorably eventful year in the GovCon industry, ” said Jim Garrettson, president and founder of Executive Mosaic. “We would like to congratulate this year’s recipients as the leaders and voices that will shape GovCon.”