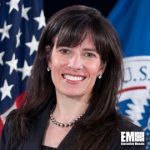 Trusted relationships between government and private businesses are priority number one for the Department of Homeland Security‘s effort to protect U.S. cyber and physical infrastructure, a lead DHS official told the Potomac Officers Club Thursday.

Phyllis Schneck, deputy undersecretary for cybersecurity and communications at DHS’ National Protection and Programs Directorate,  said cooperative research and development agreements with companies are one way for DHS to find what tools and methods are in the commercial arena.

“We don’t have everything in government and we have to learn, ” Schneck said to a public and private sector executive audience in McLean, Va.

“We’re figuring out what to buy from the private sector.”

Schneck was the second keynote speaker for the POC’s Fall 2015 Cybersecurity Summit, a half-day event for government and contracting executives to discuss the current cyber environment in both the public and private sectors and ways to collaborate in the network security arena.

The former McAfee public sector chief technology officer also outlined the DHS NPPD organization’s goal to transition from defense of threats already known to a proactive approach against potential adversaries that government and industry do not know of.

Information exchanges between agencies and businesses will be a key aspect of that, she said.

“DHS needs to be the port to connect the dots, paint the picture and share with our agency partners and companies, ” Schneck said.

“Our mission is .gov and beyond to states, local governments and the private sector.”