The Defense Department said Thursday the cost-plus-fixed-fee contract has a base value of $53.1 million and base period of performance through Oct. 21, 2016.

Northrop will perform work in California in support of the Office of Naval Research‘s efforts to further develop the weapon systems design and components as well as boost the lethality of its laser weapon systems, DoD added. 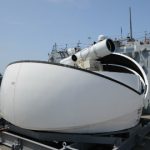 The obligated amount of $36.5 million at the time of award is from the Navy’s research, development, test and evaluation funds for fiscal years 2015 and 2016.

The unit reported in December last year that it has deployed and operated the Navy Laser Weapon System aboard USS Ponce during operational demonstrations in the Persian Gulf.