Andrea Shalal writes that filings with theÂ U.S. Securities and Exchange CommissionÂ indicate that U.S. officials, as well as regulators in Japan and South Korea, haveÂ approved the acquisition deal.

Lockheed and UTC still seek regulatory approval from authorities in other countries and could close the transaction before the end of the year, the report said.

The companies announced the deal in July alongside Lockheed’s review of plans to potentially sell or spin off parts of itsÂ information systems and global solutions business.

The Justice Department consulted with the Defense Department and other federal agencies to review the proposed acquisition, Shalal reports.

Andrew Clevenger also reports on Defense News that the approval following the two-month reviewÂ means that there will not be a second request for information from regulators.

Jeff Bialos, a partner at Sutherland Asbill & Brennan and formerÂ deputy undersecretary of defense for industrial policy, told Defense News that the speed of the review and approval process is “surprising.”

“That’s reasonably quick for a transaction of this size and scope, ” he said, according to the report.

“It’s somewhat surprising that a deal of this magnitude didn’t go to a full second request.” 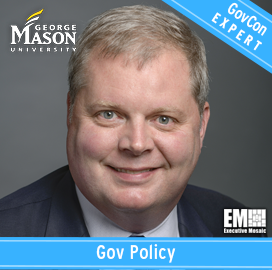 George Mason University and industry executives discussed the implications of the ongoing coronavirus pandemic for both agencies and companies during a webinar hosted by GMU's Center for Government Contracting. "Panelists noted that businesses need to take an extremely proactive role in communicating and engaging with their government customers and that government agencies need to likewise recognize the centrality of the contract workforce for their respective missions," Jerry McGinn, the center's executive director, told GovCon Wire.