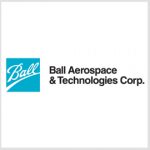 Steve Smith, director of systems engineering solutions at Ball Aerospace & Technologies, has been promoted to vice president and general manager of the company’s SES business unit.

He succeeds the retiring Dan Gibson and will oversee the unit’s contract performance and operations across the country, Ball Aerospace said Friday.

Smith is a recipient of awards such as the Superior Service Medical from the National Reconnaissance Office and the Collaborative Leadership Award from the Director of National Intelligence.

Ball Aerospace said Gibson, who has led SES for seven years, will retire on June 30.