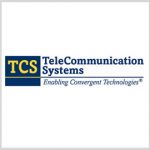 The Annapolis, Md.-based wireless technology contractor said its revenue for the quarter grew 19 percent from the prior year period to $93.3 million and total revenue for the year was $359.9 million.

Revenue for the quarter in the company’s government segment was up 30 percent to $47.6 million, an increase the company attributed to higher sales volume.

Maurice Tose, TCS chairman and CEO, said the company foresees a “much improved” pipeline of federal business due in part to the national public safety network program known as the First Responder Network Authority, or FirstNet.