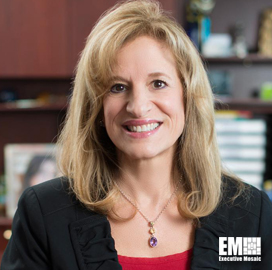 Julie Gravallese, a 33-year veteran of Mitre and formerly director of its information technology center, has been promoted to vice president and chief human resources officer at the nonprofit research-and-development organization.

Mitre said Thursday Gravallese has held director-level positions over the past 19 years at the organization, which operates federally-funded R&D centers for the government.

Alfred Grasso, president and CEO of Mitre, said Gravallese’s career at the organization has encompassed “a focus on building partnerships, and strategic analysis and critical thinking.”

“She also brings detailed knowledge of Mitre’s business, customers, and operations of our line organizations, ” said Grasso, an inductee into Executive Mosaic’s Wash100 list for 2014-15.

Gravallese is also a former director of Mitre’s open systems center, which focuses on technology integration for government programs, and has also served as technical director of geospatial and space intelligence programs.

In the latter role, she oversaw a team of close to 150 engineers and computer scientists that supported two ot Mitre’s customer portfolios within the intelligence community.

TYSONS CORNER, VA, May 23, 2019 â€” Julie Gravallese, vice president for programs and technology integration at Mitre , represented the nonprofit in signing an agreement with the National Security Collaboration Center at the University of Texas at San Antonio to undertake a series of pilot programs designed to advance research and workforce development efforts,

TYSONS CORNER, VA, June 26, 2017 â€” MitreÂ has been included in a list of the “Top Workplaces” in 2017 for the third consecutive year and was ranked 10th under the category for organizations with 500 or more employees, GovCon Executive reported Tuesday. The company said June 19Â the recognition is based on employee feedback and covers
Sponsor