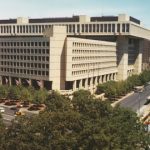 The General Services Administration is seeking proposals from real estate developers on the construction of a new and consolidated FBI headquarters to replace the J. Edgar Hoover Building in Washington.

GSA said Friday that FBI is considering locations in Greenbelt and Landover in Maryland and in Springfield, Virginia.

He said the move to a new headquarters can facilitate redevelopment in Washington’s Penn Quarter neighborhood and help GSA in “[shrinking] the Federal footprint.”

According to GSA, the future facility will cover an area of 2.1 million square feet and house all employees in one location, supporting efforts to cut costs, save energy and boost workplace efficiency.

The RFP is for Phase 1 of the project.

GSA said it will accept proposals through Feb. 10, 2015, and release the draft Environmental Impact Statement on the three potential locations in the spring.