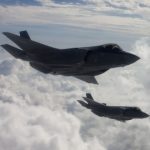 Carothers won the first task order, worth $34.4 million, to build an F-35 hangar at the Marine Corps Air Station in Beaufort, South Carolina.

Work under the multiple-award design-build contract is scheduled to be completed in August 2017.