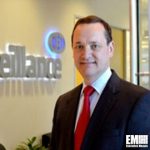 “As our global business and service offerings continue to expand, it will be critical for us to have experienced leaders like Steve to guide us through this transition, ” Scott Kaine, Cyveillance president, said Monday.

Mestraud has supported Qinetiq’s operations for the last 20 months in his role at Solomon Edwards Group and served as controller of financial operations at Airbus Group Inc., which formerly operated as EADS North America.

He moved to the U.S. in 1997 while he was a finance leader at British Telecom/Concert Communications and is also a veteran of firms such as Grant Thornton and PwC.