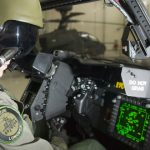 “We are proud to expand our long-standing relationship with the US Air Force and Sikorsky, providing a new aircraft system capable of performing the vital personnel recovery missions, including combat rescue and casualty evacuation, ” said Dale Bennett, Lockheed executive vice president for mission systems and training.

Sikorsky will build the helicopters at its facility in Connecticut, while the mission equipment will be installed by Lockheed in New York.

“We had the need, we had a proposal on the table, which was a good buy for the taxpayer, we had seed money from the Congress … these were the various factors, ” said Air Force Secretary Deborah Lee James.