Gillie will oversee work to implement corporate growth strategies at Telos in his new role.

His four years at CACI included work on business processes and program management and the previous four years were spent at Alion Science and Technology as VP and director of corporate projects.

Gillie started as a project management analyst at Science Applications International Corp. (NYSE: SAI), where he worked for 12 years and eventually served as VP and senior project control director. 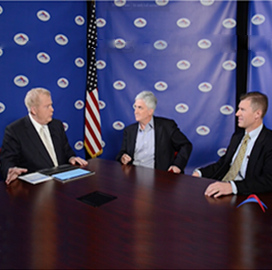 The Bridge on TV to Discuss Improving Government-Industry Cybersecurity Cooperation

Learn how security gaps between Government and industry threaten your data and your identity. Watch as Rick Tracy, Chief Security Officer, Telos Corporation; and Matt Barrett, Cybersecurity Framework Program Manager at National Institute of Standards and Technology (NIST), share ideas for improving Government-Industry cybersecurity cooperation. Join them, and moderator Jim McCarthy, on The Bridge on