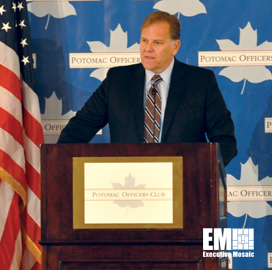 As covered on ExecutiveGov, House Intelligence Committee Chairman Mike Rogers (R-Mich.) has announced his intention to retire from Congress.

Rogers has represented Michigan’s eighth district since 2001 and will now join the private sector after a career of public service that includes time in the U.S. Army, work as a special agent for the FBI and election to Michigan’s state senate.

He had been floated as a potential candidate to be the next director of the CIA and received public backing from the FBI Agents Association as their preferred successor to head the bureau.

“I had a career before politics and always planned to have one after, ” Rogers noted in a prepared statement. “The genius of our institutions is they are not dependent on the individual temporary occupants privileged to serve.”

Rogers is a frequent guest on news programs and talk shows, and is often quoted in media outlets surrounding his positions and perspectives on national security and other issues.

Now in private practice, he said he plans to “continue serving as a voice for American exceptionalism” as a host of a national radio show.

Rogers has recently been in the press regarding a proposal from him and Dutch Ruppersberger, the ranking member of the House Intelligence Committee, to alter the way the U.S. government collects phone data from American citizens.

The two lawmakers will join the Potomac Officers Club on April 9 to discuss Congress’ role in protecting American cyberspace, and to address collaboration between the private and public sectors.

Click here to learn more about the 2014 GovCon Cyber Summit and topics covered by additional speakers including Bobbie Stempfley of DHS, Joe Demarest of the FBI, and Michael Daniel of the White House.

Rogers recently caught up with Meet the Press to discuss recent developments in Ukraine and Asia. See that conversation in the video below.