Harris Corp. (NYSE: HRS) has won an $18 million order from the U.S. Special Operations Command for manpack and handheld radios as USSOCOM aims to grow its tactical communications network.

The company intends for users to communicate voice, video and data during intelligence, surveillance and reconnaissance operations with each other through the Falcon III radios, Harris said Monday.

Falcon III radios are built to be compatible with legacy narrowband waveforms.

Harris received the order during the second quarter of its 2014 fiscal year.

Harris (NYSE: HRS) has secured a potential $260 million order to build an integrated tactical communications system for an unidentified country in the Asia-Pacific. The company said Monday it will integrate monitoring, planning and routing software as well as vehicular amplifiers and Falcon III radio technology into the customer’s future tactical communications network. The network will 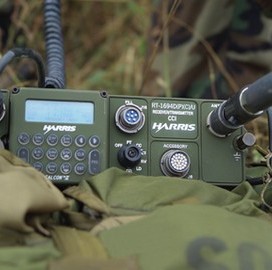 Harris (NYSE: HRS) has received $90 million in contracts from a European country for the delivery of tactical radios such as the Falcon II AN/PRC-150C and Falcon III AN/PRC-152A. The company said Tuesday the radios will work to support the customer’s efforts to establish communications readiness and interoperability with U.S., NATO and coalition operations. Harris secured the
Sponsor