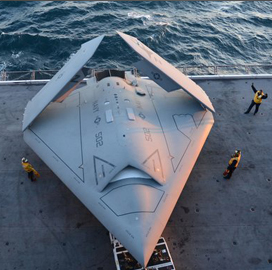 The military is increasingly turning to unmanned aerial vehicles for surveillance and combat operations because of the aircraft’s multimission capabilities and technologies, the New York Times reported Sunday.

Boeing intends for Solar Eagle to airborne for as long as five years, Solan reports.

Michael Richter, head of aerospace and defense investment banking at Lazard, told the Times U.S. drone and cybersecurity programs might not be affected by spending cuts.

Philip Finnegan, director of corporate analysis at aerospace consultancy Teal Group, told the Times he expects the U.S. fiscal 2014 budget plan to include more drones intended to be stealth.