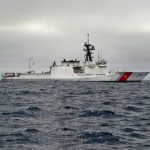 “This advance procurement contract allows us to maintain production line and supplier base momentum while we prepare for the ship construction contract, ” said Jim French, Ingalls’ NSC program manager.

Huntington Ingalls has handed three NSCs to the Coast Guard and Hamilton, the fourth cutter, is scheduled to launch later in 2013 with the christening slated for Oct. 26.

The company has also fixed the keel on the fifth cutter named James and aims to start constructing the sixth ship, Munro, later this year.