The company will perform work under the firm-fixed-price contract in Fort Wayne, Ind. through Dec. 30, 2015 and the U.S. Army Contracting Command’s office at Fort Monmouth, N.J. is the contracting activity.

Raytheon is prime contractor on a proposed $257 million foreign military sale of equipment for intelligence, surveillance and reconnaissance to Saudi Arabia.

Prachi Sukhatankar, vice president of technology solutions with Amentum, was featured on Thursday in the latest Executive Spotlight interview with ExecutiveBiz.  During the discussion, Sukhatankar discussed the company’s technology strategy including common challenges, business alignment, key initiatives and innovation. She also discussed how Amentum rebranded from AECOM in 2020 as well as where the company 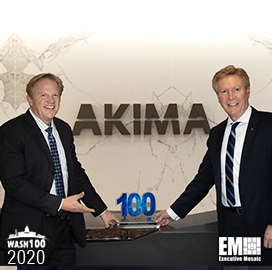 Bill Monet, CEO of Akima, earned his first Wash100 Award for his leadership and expertise over 30 years in the federal sector working with federal, state, local and commercial clients to drive company growth and expand its portfolio by securing major contracts across the government contracting (GovCon) sector. Executive Mosaic congratulates Akima and Bill Monet on his 2020 Wash100 Award.