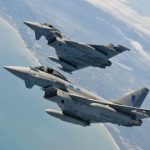 BAE Systems will sign a potential 10-year, $2.8 billion agreement with the U.K.’s ministry of defense to support the country’s Typhoon fleet in partnership with the U.K. air force and Leonardo-Finmeccanica.

The company noted the TyTAN agreement will also introduce new systems to address operating costs at the Coningsby and Lossiemouth air force bases and use the potential $663.6 million in savings to develop new concepts for the aircraft.

“Combining support arrangements into one program will help to increase reliability and availability of the fleet, while making it cheaper to support, ” said Chris Boardman, BAE Systems managing director of military air and information.