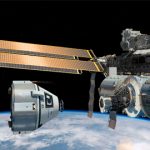 The agency said Thursday that Boeing has completed an integrated critical design review of its CST-100 space capsule and is ready to enter the assembly, integration and testing phase.

“We’re on track to fly in 2017, and this critical milestone moves us another step closer in fully maturing the CST-100 design, ” said John Mulholland, vice president of commercial programs at Boeing.

SpaceX, which was awarded a $2.6 billion CCtCap contract, could receive an initial order from NASA later this year, according to the agency.

A standard ISS flight mission would transport four crew members and approximately 220 pounds of cargo and have spacecraft docked at the space station for up to 210 days.

Boeing and SpaceX could deliver up to six crewed flight services through the program.